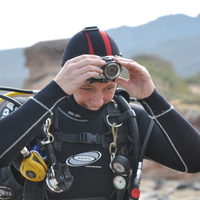 Abstract
The terms ‘Mediterranean’ and ‘Tsunami’ are not typically thought of together.  However, the Mediterranean includes volcanoes, earthquakes, and underwater slump features that are potential tsunami-generating mechanisms. There are written records of such events, but only a small portion have been confirmed with physical field evidence.  On the coast of modern Israel in the eastern Mediterranean, over 13 tsunami events are included in historical records over the past 2500 years.  However, none of them, until recently, were corroborated with evidence from the field. Caesarea Maritima, an archaeological coastal site in central Israel, was the first place in which tsunami evidence was discovered.  Since the first tsunami discovery there in 2000, five more tsunami events over six thousand years have been identified and described.  The discoveries have been aided by approaching the exploration from the sea first.  Offshore excavations and sediment coring produced relatively well-preserved sequences; and as the understanding of the character of these deposits improved, it aided efforts on land.  Today, these findings are proving critical for emergency management plans, national preparedness, and the methods are improving the ability to construct tsunami catalogues in regions without written records.

Bio
Beverly Goodman is a marine geoarchaeologist from the University of Haifa Charney School of Marine Sciences, Department of Marine Geosciences. She explores the ocean, discovering physical evidence for ancient tsunami events and associates them to the archaeological coastal sites that experienced them. Her work has exposed previously unknown and never investigated areas that contain a treasure of data that is important to the safety and future of populations living on coastlines. Amongst her most significant discoveries was the presence of tsunami deposits in Israel, the furthermost extreme of the eastern Mediterranean, which were associated to the Bronze Age eruption of Thera on Santorini. That event, in its time, affected the lives of people throughout Crete and the Mediterranean, and possibly much of the world. The primarily goal of her novel work is to reconstruct past coastal histories using geology and archaeology as a means to better prepare for the uncertainties of the future. Recently, the results from her work were incorporated into the Israel National Disaster plan for coastal risk. Her work has resulted in numerous awards (including NOAA Ocean Hero, National Geographic Emerging Explorer, Fulbright and Kavli Fellow), though her most satisfying honor has been bringing the information into the public realm. Beverly lives with her family of four boys and marine biologist husband on the shores of the Mediterranean, at a safe elevation from the sea.