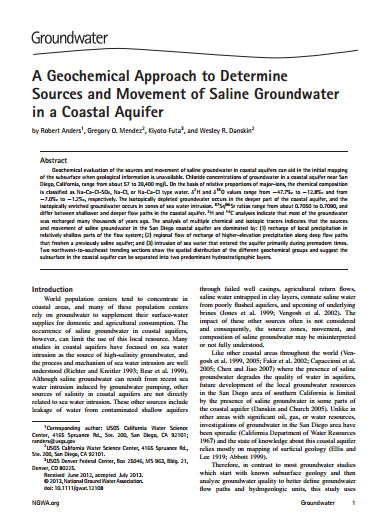 In 2001, local water agencies and the United States Geological Survey (USGS) began a comprehensive geologic, hydrologic, and geochemical investigation of the groundwater resources in the coastal San Diego area (http://ca.water.usgs.gov/sandiego). The article presents the geochemical approach used in the study to determine the sources and movement of saline groundwater in the San Diego coastal aquifer. These findings are aiding local water managers in mapping the subsurface, in developing a conceptual hydrogeologic framework, and in planning for additional desalination of brackish groundwater.

Geochemical evaluation of the sources and movement of saline groundwater in coastal aquifers can aid in the initial mapping of the subsurface when geological information is unavailable. Chloride concentrations of groundwater in a coastal aquifer near San Diego, California, range from about 57 to 39,400 mg/L. On the basis of relative proportions of major-ions, the chemical composition is classified as Na-Ca-Cl-SO4, Na-Cl, or Na-Ca-Cl type water. δ2H and δ18O values range from -47.7% to -12.8% and from -7.0% to -1.2%, respectively. The isotopically depleted groundwater occurs in the deeper part of the coastal aquifer, and the isotopically enriched groundwater occurs in zones of sea water intrusion. 87Sr/86Sr ratios range from about 0.7050 to 0.7090, and differ between shallower and deeper flow paths in the coastal aquifer. 3H and 14C analyses indicate that most of the groundwater was recharged many thousands of years ago. The analysis of multiple chemical and isotopic tracers indicates that the sources and movement of saline groundwater in the San Diego coastal aquifer are dominated by: (1) recharge of local precipitation in relatively shallow parts of the flow system; (2) regional flow of recharge of higher-elevation precipitation along deep flow paths that freshen a previously saline aquifer; and (3) intrusion of sea water that entered the aquifer primarily during premodern times. Two northwest-to-southeast trending sections show the spatial distribution of the different geochemical groups and suggest the subsurface in the coastal aquifer can be separated into two predominant hydrostratigraphic layers.