SDSU to search seafloor for artifacts of ‘First Americans’

Gary Robbins of the San Diego Union-Tribune published an article featuring the work of our own Dr. Jillian Maloney! 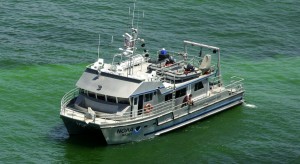 San Diego State University plans to search the seafloor off Southern California for clues that could help answer two of the oldest and most contentious questions in science: When did the first modern humans arrive in the Americas? And did they initially spread south from Siberia by following ancient Pacific shorelines that are now covered by water?  San Diego State and its partners will use sensors to look for areas in the northern Channel Islands that might have been human settlements thousands of years ago when the sea level was lower and the land was exposed.  Scientists said these “submerged cultural landscapes” might contain remnants of the tools that the “First Americans” used for fishing, hunting and boating, as well as sites where they cooked shellfish.  The $900,000, federally funded study is scheduled to unfold during the next four years. It represents the largest underwater archaeological expedition of its kind conducted off Southern California.  It also underscores a grand irony: Scientists are able to spot planets situated dozens of light years from Earth, but figuring out key details in human history remains elusive.

“We’re taking up fundamental questions about who we are and where we came from,” said Todd Braje, an SDSU archaeologist who is helping to lead the project with Jillian Maloney, one of the school’s geoscientists.

“This is about human history and the human odyssey,” Braje added.

Scientists are confident that they have reconstructed part of the story.  It’s widely believed that Asia and North America were linked by a “land bridge” across the Bering Strait during the last Ice Age, when the sea level was hundreds of feet lower. The bridge, which is now covered by water, connected Siberia to Alaska and northwestern Canada.  Researchers theorize that humans crossed the bridge from Siberia to hunt for mastodons, mammoth and other large game. These “First Americans” used sharp projectiles to slay their prey.  But what route — or routes — did they follow into the Americas? Exactly when did they migrate to the New World? And did these settlers move in one migration, or in many? Those questions remain unanswered, and exploring them has proven to be a humbling, acrimonious experience.  In the 1920s and ’30s, stone spear points were discovered near Clovis, N.M., drawing intense interest from archaeologists. Scientists decided that these “Clovis points” were part of hunting spears used by the first settlers.  The thinking was that the settlers had traveled from Siberia into Canada, then moved southeast through an opening in the ice sheets, reaching the interior of North America. It is the foundation of the Clovis First theory, which asserts that the settlers arrived about 13,000 years ago. The theory became dogma as artifacts from Clovis culture were found in other parts of the Americas.

“Adherence to that view has become almost a litmus test for acceptance into (archaeology),” The Scientist magazine said in a retrospective.

But the theory slowly began to unravel in the 1970s when American researcher Tom Dillehay identified artifacts from a human settlement in Chile. Dillehay determined that the artifacts were at least 14,000 years old, predating Clovis culture.  Many scientists furiously disagreed with his claim. But it turned out to be true, and researchers have since found other sites where the archeological record suggests that settlers arrived before the Clovis people.  The findings include a site in southern Oregon that some scholars see as possible evidence that the “First Americans” originally traveled south along the Pacific coast, by foot and by boat.  San Diego State will explore the so-called Pacific Coast migration model with funding from the U.S. Bureau of Ocean Energy Management, which protects marine assets on the West Coast