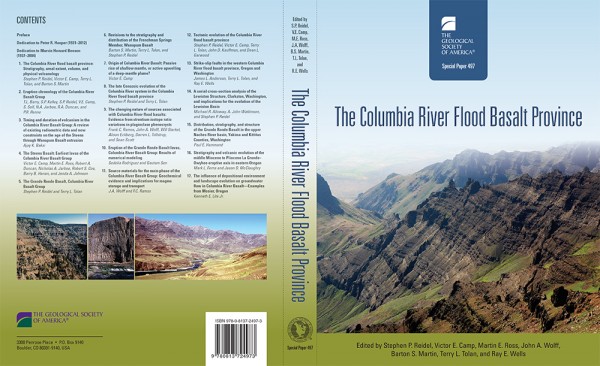 Vic Camp is a co-editor of this new Special Paper, and co-author on five of the incorporated papers.  GSA Special Paper 497 is in press, and will be released September 13, 2013. The frontpiece is a photo that Vic took at the Summit of Steens Mountain.

Description
The Miocene Columbia River flood basalt province covers ~210,000 km2 of the Pacific Northwest of the United States, and forms part of a larger volcanic region that also includes contemporaneous silicic centers in northern Nevada, the basaltic and time-transgressive rhyolitic volcanic fields of the Snake River Plain and Yellowstone plateau, and the High Lava Plains of central Oregon. The Columbia River flood basalt province is accessible and well exposed, making it one of the best-studied flood basalt provinces worldwide, and it serves as a model for understanding the stratigraphic development and petrogenesis of large igneous provinces through time. This volume details our current knowledge of the stratigraphy and physical volcanology; extent, volume, and age of the lava flows; the tectonic setting and history of the province; the petrogenesis of the lavas; and hydrogeology of the basalt aquifers.