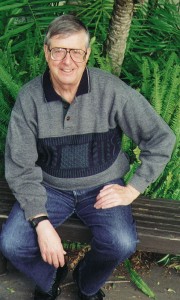 Dr. Richard (Dick) W. Berry, Professor Emeritus of Geological Sciences at San Diego State University, passed away suddenly at his home in Avon, Connecticut March 10 in the company of his wife JoAnne. Dick had undergone heart surgery back in November 2013, but had been quite upbeat and positive about the results and seemingly on the mend. Around Valentine’s Day he reported feeling great and was putting the final coat of polyurethane on a cabinet of drawers for his mineral specimens.

Dick enjoyed a rich academic career focused on clay mineralogy and was a long-time member and valued contributor to The Clay Minerals Society. He displayed bold insight in inviting the then 92 year old Nobel Laureate Dr. Linus Pauling to be the featured speaker at the society’s 1993 annual meeting in San Diego where Pauling delivered his last public lecture. This is a treasured moment in the society’s history, which traces its roots to Pauling’s initial crystal structure discoveries at Caltech.

Dick was also a dedicated educator determined to make a difference in students’ lives. Amongst his many accomplishments he was the mainstay of the Department’s mineralogy program for many years, developed a geology course for pre-service elementary school teachers, engaged in development of a new Science framework for public schools in 2000, and was instrumental in the acquisition of a new state-of-the art X-ray Diffractometer in the Department in 2001.

Dick was born June 21, 1933 in Quincy, Massachusetts to his father George – a naval architect – and mother Blanche. He received a BA in 1955 in Mining Engineering from Layfayette College in Easton PA when it was still closely affiliated with the Presbyterian Church. He went on to receive his MS (Exploration Geophysics 1957) and PhD (Geochemistry and Clay Mineralogy 1963) from Washington University in St. Louis, MO, arriving in 1961 at SDSU as a faculty member. The ensuing 40 years, before his retirement from the University in 2001, were a time of growth, intellectually as a professor and scientific researcher, and spiritually as a Christian active in the Presbytery. Following his retirement in 2001 he continued to serve SDSU in an Emeritus capacity before moving back to Connecticut to be closer to family.

Dick valued family and church, enjoyed traveling, and contributing to the community. He is survived by three sons (one of them a Presbyterian Pastor) and two step-daughters. His wife JoAnne and he shared 12 grandchildren. He will be missed.

Add a memory or condolence to the guest book