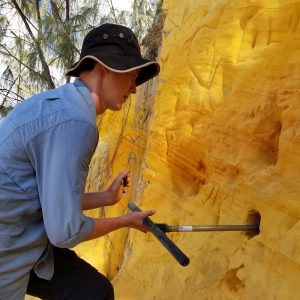 Abstract
The Cooloola Sand Mass is a large (~260 km2) coastal dunefield situated within the Great Sandy Region of southeast Queensland, Australia and forms part of the terminus of the longest downdrift sediment system on the planet. Within the sand mass, numerous phases of dune building interspersed with periods of stabilization and podzolisation have created one of the longest records of Quaternary environmental change from the sub-tropics that spans the last ~1 Ma. Despite the extensive nature of these sand deposits, both the timing and causes of dune activation and stabilization remain little investigated.

This study presents a comprehensive chronostratigraphic framework for the development and evolution of the Cooloola Sand Mass based on optically stimulated luminescence (OSL) dating. The ages are contextualized using geomorphic mapping and stratigraphic logging supported by ground penetrating radar (GPR). At least eight major dune units are recognized. OSL results suggest that the earliest dune activity occurred ~800-700 ka. Other major phases of activity are dated to 500-400 ka, ca. 150 ka, 70-50 ka and 2-3 ka. We note that the onset of dune activation appears to coincide with the mid-Pleistocene transition where records suggest glacial cycles switched from being largely sensitive to obliquity to eccentricity dominant Milankovich cycles. Dune activity at Cooloola correlates with stadials and lowstands, which suggests that exposure of the continental shelf during falling sea-levels provides access to sediment sources and triggers widespread dune activation