Combining paleoseismic and geodetic data to study the characteristics of an auxiliary plate boundary fault within the California Borderlands: Earthquake history and preliminary slip rate for the southern section of the Newport-Inglewood-Rose Canyon fault system 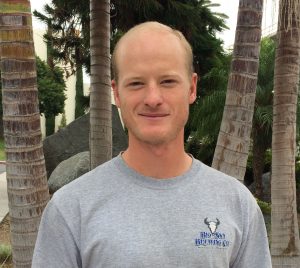 Abstract
Approximately 5-15% of the estimated 50 mm/yr plate boundary deformation in southern California is accommodated by the offshore faults that comprise the Inner Continental Borderlands (ICB). The precise distribution of slip and earthquake history in the ICB is poorly constrained due to a combination of observational limitations and a lack of geophysical and geological data integration. The Newport-Inglewood-Rose Canyon fault (NIRC) is the easternmost fault in the ICB and is composed of both onshore and offshore segments, offering the opportunity to resolve the earthquake history and slip rate for a fault within the ICB. We present the results of two paleoseismic trenches opened in Holocene stratigraphy across the Rose Canyon fault (RCF), the southern onshore section of the NIRC in San Diego, CA. From the stratigraphic record in the trenches, there is evidence for six surface ruptures in the past ~3,300 years.  Based on the width and amount of faulting, four of the paleo-earthquakes are interpreted to represent larger-magnitude events (M~6.5-7). Furthermore, these events correlate well in time with paleo-earthquakes reported at locations farther north along the onshore NIRC, indicating the possible occurrence of either end-to-end ruptures or a sequence of cascading earthquakes. The apparent timing of these earthquakes suggests a late-Holocene recurrence interval of ~700-800 years for the NIRC, several hundred years shorter than previous estimates, and raises important questions regarding the slip rate and slip per event for the southern NIRC. Because of the offshore locality, the transfer of strain between the fault systems of the Baja Peninsula and the ICB has been difficult to determine. The RCF’s ~35 km onshore segment offers an opportunity to resolve part of this strain partitioning in the ICB. A network of high-precision centering survey GPS monuments constructed in 1998 across the RCF (last surveyed in 2017) allows us to supplement the geologic estimates of slip with a more robust measure of motion across the entire fault zone. Preliminary results from this network show a strain accumulation rate for the RCF that is closer to the higher end of geologic slip rate estimates.  A higher RCF slip rate could indicate that a larger portion of the offshore slip budget may currently be directed into the NIRC from the south.