The mechanics of multifault ruptures and the keystone fault hypothesis 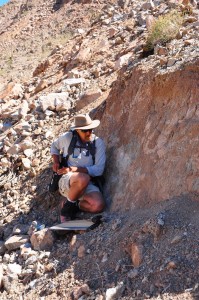 Abstract
Regardless of the tectonic environment in which they occur, most large earthquakes throughout the world activate slip on more than one fault. Likewise, the magnit

ude of an earthquake increases substantially with the number of faults that become activated. Despite the importance of multi-fault ruptures for forecasting seismic hazard, their genesis remains poorly understood and static yield criteria are inadequate to describe the mechanical conditions required to prepare multiple faults with diverse orientations to fail simultaneously in a single earthquake. This is because the critical stress level for fault failure depends greatly on fault orientation and is lowest for optimally oriented faults positioned approximately 30° to the greatest principal compressive stress. Yet, misoriented faults whose positioning is not conducive to rupture are also commonly activated in large earthquakes. 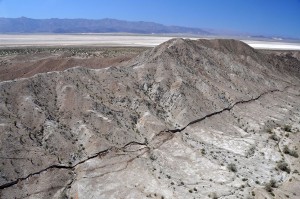 The 2010 El Mayor-Cucapah earthquake of magnitude Mw 7.2 produced the most complex rupture ever documented on the Pacific-North American plate margin, and the network of high- and low-angle faults activated in the event record systematic changes in coseismic slip direction with fault orientation. Using stress inversions of surface displacement and seismic data, we find that the El Mayor-Cucapah earthquake initiated on a fault, which due to its orientation, was among those that required the greatest stress for failure. Although other optimally-oriented faults must have reached critical stress earlier in the interseismic period, Coulomb stress modeling shows that slip on these faults was initially muted because they were pinned, held in place by misoriented faults that helped regulate their slip. In this way, faults of diverse orientations could be maintained at critical stress without destabilizing the network. We propose that regional stress build-up continues until a misoriented keystone fault reaches its threshold and its failure then spreads spontaneously across the network in a large earthquake. In addition to explaining the mechanics of multifault ruptures, our keystone fault hypothesis provides new understanding for the seismogenic failure of severely misoriented faults like the San Andreas Fault and the entire class of low-angle normal faults.