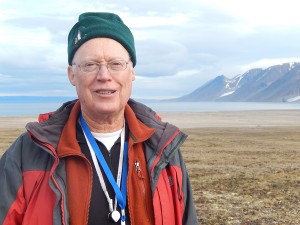 Abstract
This talk is a special one for me. As time slips by more and more quickly, I realize that there are fewer and fewer geologists remaining whose careers have spanned the great plate tectonic revolution of the late nineteen sixties—and even fewer who were personally/scientifically involved in it. Since I am one of them, I want to share a somewhat personal trip down the memory lane of one of the greatest paradigm shifts in earth sciences…and show some of the ways it has contributed to the understanding of our own local geology.

When I was in my last undergraduate year at SDSU in 1966, we were taught that the proposal  by the German meteorologist, Alfred Wegener, that the Atlantic Ocean had formed by the spreading apart, or ”drift”, of the adjacent continents was “stupid”. Just two years later, in December of 1968, I was sitting in the audience at the annual meeting of the American Geophysical Union in San Francisco. Marine geophysicists showed slides of the linear marine magnetic anomalies that they had measured over all the world’s oceans. Those squiggly lines, by their symmetry, worldwide sameness, and, most importantly, perfect match to the recently developed geomagnetic reversal timescale, proved without a doubt that the seafloor did spread away from the oceanic ridges and rises and, in the case of the Atlantic Ocean, carried the adjacent continents with them. We all sat there stunned—realizing that Wegener was basically right!

The most convincing proof for seafloor spreading was the match between the marine magnetic anomaly pattern and the pattern in geologic time of the just-discovered geomagnetic reversals. As the newly created oceanic crust cools and spreads away, it acts just like a double headed tape recorder and forms alternately normally and reversely magnetized strips of oceanic crust parallel to the ridges and rises. Because reversals of the earth’s magnetic field are random, a true barcode is created. This allowed marine geophysicists to date the age and study the tectonics of the seafloor. My contribution during that revolution was to discover, in the course of my PhD research, that the seafloor pillow basalts—which compose the upper igneous layer of the oceanic crust, were an order of magnitude more strongly magnetized than subaerial basalts, and that they are the major source of the marine magnetic anomalies.

One of the first people to use these squiggles to continental tectonics was a graduate student, Tanya Atwater, at the Scripps Institute of Oceanography in San Diego. In a classic paper in 1970, she used the marine magnetic anomalies in the northeastern Pacific to show that although the Farallon Plate (FP) had been subducting under our coast for tens of millions of years, this changed radically when a projection of the Pacific-Farallon spreading center came into contact with the North American Plate (NAP) about 30 Ma in the vicinity of Los Angeles. This point of contact lengthened into a line/plate boundary with largely strike slip relative motion between two triple junctions, until at about 5 Ma the southern end/triple junction reached Cabo San Lucas/Puerto Vallarta and the Baja Peninsula was rifted from mainland Mexico, and the modern San Andreas system was born.

In the years since 1970, the marine magnetic anomaly pattern offshore of the two Californias has continued to be studied and refined by Tanya and others. This, combined with a better understanding of the complexity of the subduction process, have led to a better model for the formation of the California Continental Borderland (CCB). The continental borderland from Santa Barbara to Cedros Island/the Vizcaino Peninsula is very special. It’s much wider, more tectonically deformed, has a much more irregular bathymetry, and has a different inner CCB basement lithology, than the continental margin to the south or north.

More detailed studies of the marine magnetic anomalies just off the coast of the two Californias revealed that not all of the Farallon Plate in this area was subducted, and that these last pieces, or microplates, have been sutured onto the Pacific Plate and are moving northwestward with it. Parts of these microplates may have even been subducted under the leading edge of the North American Plate and were then pulled back out! Secondly, plate tectonicists and crustal seismologists found that, because of the shallowing of its subduction angle at about 80 Ma, the FP may have rubbed against the bottom of the NAP. This basal traction may have not only eroded all of the western NAP mantle but even some of its lower crust–and, in the process, inserted a layer of metamorphosed oceanic sediments and pieces of oceanic crust—called the Catalina Schist in the  inner CCB and the Orocopia Schist out in the Orocopia and Chocolate Mts. Some of the thinned, leading edge of the North American Plate was rifted and rotated by the underlying pieces of the FP that had joined the Pacific Plate and were moving northwest with it. The famous 90 degree CW rotation of the western Transverse Ranges began at 18 Ma, and much of the former continental margin as far south as Cedros Island swung seaward and was translated north. This belt of forearc sedimentary rocks is now called the outer CCB, and the gap left behind them is the inner CCB. The contact between it and the NAP seems to be a low angle/detachment fault fairly close to the coastline. The inner CCB consists, at its base, of the exhumed FP microplates, capped by Catalina Schist, and covered with Miocene sedimentary and volcanic rocks and younger sediments. This microplate capture apparently began south of Cedros Island at about 12 Ma and may be the cause of the early rifting seen in the proto-Gulf of California at this time.