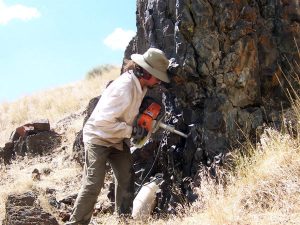 Abstract
The first Columbia River Basalt Group (CRBG) eruptions occurred around Steens Mountain in southeastern Oregon and the basaltic eruptive center moved northeast over the next 1-1.5 million years. During the same time interval, a series of calderas erupted in a trend to the southwest. These trends support the idea of a spreading plume head as the source of volcanic activity. I will discuss two Mid-Miocene flow-on-flow basaltic stacks along a third trend to the southeast called the Northern Nevada Rift. The two sections erupted near the end of the main CRBG eruptions at about 15.2 Ma. They are found 135km apart in Northern Nevada. One in the Santa Rosa Range about 120 km from Steens Mountain and the other at Sheep Creek about 250 km from Steens. Both record a reverse-to-normal magnetic polarity transition with similar magnetic directions and the reversal can be identified as the top of the C5Br polarity chron. 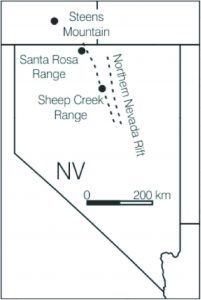 Bio
Dr. Nicholas Jarboe is Data Systems Analyst at the Scripps Institution of Oceanography at the University of California, San Diego. His current research interests include: the dynamics of the Earth’s magnetic field during magnetic reversals, the Columbia River Basalt Group evolution and expression, high precision 40Ar/39Ar dating in basalts, and compiling diverse paleomagnetic data sets into searchable data stores. He is a major contributor to the MagIC paleomagnetic database project. He received his PhD from the University of California, Santa Cruz from the Department of Earth and Planetary Science.