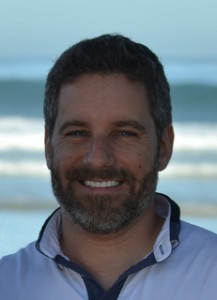 Numerical simulations of the dynamic rupture and wave propagation help to understand and predict source directivity and basin amplification effects that often lead to strong shaking and structural damage during earthquakes. In southern California a basis for assessing the economical and societal impact of a major (M>7.8) earthquake rupturing the San Andreas fault has been provided by numerical simulations of various rupture scenarios. Simulations of SE-NW propagating sources (e.g., ShakeOut) have predicted strong long-period (> 2s) ground motions in the densely populated Los Angeles basin due to channeling of seismic waves through a series of contiguous sedimentary basins. The importance of this waveguide amplification effect for seismic shaking in the Los Angeles Basin has also been confirmed from observations of the ambient seismic field.

However, previous simulations as well as ambient noise methods share the assumption of a linear viscoelastic stress-strain relationship in crustal rocks. Motivated by studies of dynamic rupture in nonlinear media, we simulate spontaneous rupture on a planar, vertical fault roughly following the surface trace of the southern San Andreas fault between Indio and Lake Hughes. We account for nonlinear material behavior using a Drucker-Prager yield condition that has been implemented in the AWP-ODC finite difference code. Friction angles and cohesions in our rock models are based on strength criteria which are frequently used for fractured rock masses in civil and mining engineering. Our simulations show that nonlinearity in the fault damage zone and in near-surface deposits would reduce long-period peak ground velocities (PGVs) in the Los Angeles basin by 15-50%, depending on the strength of crustal rocks and shallow sediments.

To systematically explore the impact of fault zone plasticity on ground motion levels we simulate a suite of scenario earthquakes representing a range of magnitudes (6.5, 7.0, 7.5, and 8.0), initial fault stress conditions and material strength parameters. For an average stress drop of 3.5 MPa, plastic yielding reduces near-fault PGVs by 15 to 30% in pre-fractured, low strength rock, but less than 1% in massive, high quality rock. These reductions are almost insensitive to magnitude. If the stress drop is doubled, plasticity reduces near-fault PGVs by 38 to 45% and 5 to 15% in rocks of low and high strength, respectively. These results show that nonlinear effects may be relevant even at long periods, especially for earthquakes with high stress drop, such as a future M 7.8 earthquake on the southern San Andreas fault.