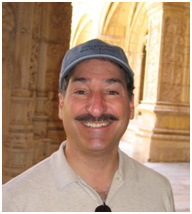 Abstract
Large historic volcanic eruptions like Tambora (1816) or Krakatoa (1883) influenced the composition of the upper atmosphere and changed the radiation balance of the entire Earth. These produced the “year without summer” and fabulous crimson-hued sunsets immortalized in paintings from the 19th century. It is postulated that much larger supervolcano eruptions like Toba (74 ka) would produce even greater, global “volcanic winter” effects. Researchers have created computer models of the possible effects, but there is scant data on the actual result of such catastrophic eruptions, because they occurred so long ago that the people living at the time didn’t document their observations very well. So, that’s where the science of paleoclimatology comes in.

Bio
Richard (Rick) Behl is Professor and Chair of the Department of Geological Sciences at California State University Long Beach, and Director of the MARS Project (Monterey And Related Sediments) industrial affiliates program. Rick earned his Bachelor’s degree from the University of California (UC) San Diego in 1978, his PhD at UC Santa Cruz in 1992, and was a Post-Doctoral Fellow at UC Santa Barbara from 1992-1995. His expertise is in the sedimentology and sedimentary petrology of hemipelagic and pelagic sediments, and their relationship to climatic, oceanographic, and tectonic change. Behl’s research focuses on the Quaternary Santa Barbara Basin and the petroliferous Miocene Monterey Formation. Rick has participated in several international marine geologic expeditions, and led dozens of field trips and short-courses for schools, professional organizations, international conferences, and industry. He has written more than 50 scientific articles and one controversial book. Behl and his students have made more than 170 conference presentations at regional through international conferences. Rick was an AAPG Distinguished Lecturer, was named a Distinguished Educator and elected President of the AAPG-Pacific Section, a Fellow of the Geological Society of America and given lifetime Honorary Membership in the Society for Sedimentary Geology-Pacific Section.