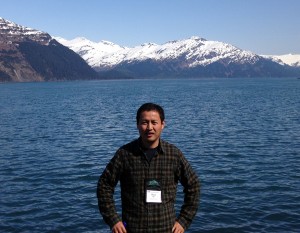 Abstract
The shallow portion (upper 5 – 10 km) of the subduction megathrust fault, governed by velocity-strengthening friction, has generally been considered to reduce near-trench slip and tsunamigenesis. However, Kozdon and Dunham (2013) showed that large shallow slip can still occur in the presence of velocity-strengthening friction if the rupture is driven strongly from the deeper fault segment (e.g., the 2011 Tohoku earthquake). Here we extend this dynamic rupture model to include inelastic wedge failure (Seno, 2000; Tanioka and Seno, 2001; Ma, 2012; Ma and Hirakawa, 2013). We show that increased basal friction due to velocity strengthening can further drive the outer wedge into failure, which was first proposed by Wang and Hu (2006). Inelastic wedge failure reduces slip on the fault, but at the same time increases the efficiency of generating seafloor uplift (the uplift efficiency is defined as the ratio of the volume of uplift to seismic potency, which is dimensionless), especially when the fault is shallowly dipping. The inelastic wedge failure also explains slow rupture velocity, deficiency in high-frequency radiation, and low moment-scaled radiated energy (Ma, 2012; Ma and Hirakawa, 2013). As the transition of friction from velocity weakening to velocity strengthening is more abrupt strain can localize in the outer wedge developing mega-splay faults. This model thus can explain a range of different mechanisms for tsunamigenesis: large near-trench slip, splay faulting, and distributed inelastic wedge failure. The occurrence of each is controlled by the wedge strength and fault friction properties.