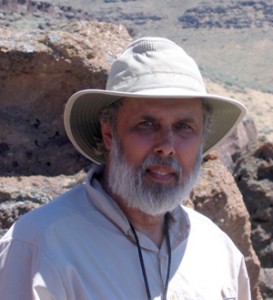 Abstract
I describe in this talk a low-density thermal feature in the mantle at ~200-50 km depth beneath SE Oregon, northern Nevada, and southern Idaho that appears to be derived from the Yellowstone mantle plume and provides the heat source for late Cenozoic bimodal volcanism in the northernmost Basin and Range.  The orientation of westward mantle flow from Yellowstone to the southern Cascades and flow velocity were both influenced by plume buoyancy into an upside-down drainage pattern at the base of the lithosphere, from a depth of 60-80 km beneath the Snake River Plain to ~35 km beneath the Oregon High Lava Plains (HLP).  An estimated range in volume flux for the melt source (15.39 m3/s to 30.78 m3/s) is lower than the total flux for most oceanic plumes, but sufficiently high since 12 Ma to produce the equivalent of a 20-to-40 km thick layer extending over 295,000 km2.  This is equal in area to the low-density layer currently underlying the northern Basin and Range and HLP.  Low-K tholeiites in the HLP are chemically equivalent to EMORB and consistent with plume material diluted by thermomechanical erosion of depleted mantle.  Since 2 Ma, westward flow of this plume-modified mantle has been directed through narrow flow-line channels delineated by finger-like trends of low-density mantle and the surface alignment of Quaternary eruption sites.  These channels have allowed low-density mantle to accumulate against the Cascades arc, thus providing a heated mantle source for mafic magmatism in the Newberry and Medicine Lake volcanic fields in Oregon and California, respectfully.

Bio
Vic Camp has been a lecturer and researcher at San Diego State University since 1993. Before that he spent 10 years working as a field geologist in variety of Precambrian to late Cenozoic terrains in West Africa, Iran and Saudi Arabia where he honed his research interests in geologic mapping, volcanology, igneous petrology, and the tectonic evolution of volcanic terrains. Over the last 25 years his main focus has been on mid-Miocene volcanism and related tectonic evolution in the Pacific Northwest, with a particular interest on the interrelationships of Farallon plate subduction, Basin and Range extension, flood basalt volcanism, and the early arrival of the Yellowstone mantle plume. Vic holds MS and PhD degrees from Miami University and Washington State University, respectfully.