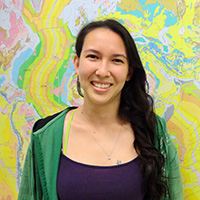 We are pleased to announce that Shelby Matsuoka has been selected to participate this summer in ‘The Mosaics in Science program’ developed by the U.S. National Park Service (NPS), in partnership with the Geological Society of America (GSA), with the aim of increasing the diversity among those who seek STEM (Science, Technology, Engineering, and Math) careers within the National Park Service.  Shelby will spend 11 weeks working at the Petrified Forest National Park in Arizona.  Her primary duties will  include assisting with ongoing excavations of Late Triassic vertebrate fossils that include giant amphibians and reptiles including primitive dinosaurs. After this she will travel to Washington, DC, to participate in a career workshop that provides opportunities to present their work and meet with various members of NPS staff and management.

The Mosaics in Science program offers paid, short-term STEM positions in some of the most beautiful natural areas in the world—National Park Service sites throughout the United States of America. Mosaics in Science is a relatively new, diversity-oriented program that began in the summer of 2013, with approximately 16 different exciting positions at locations ranging from Washington DC to Washington state.