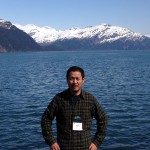 Professor Shuo Ma has been invited to lecture at the International School on Earthquake Science held September 23-27, 2013 in Hakone, Japan.  He will be amongst an elite group of 15 earthquake scientists from around the world invited to speak at conference organized by The Earthquake Research Institute of the University of Tokyo and the Southern California Earthquake Center.  Shuo will be presenting a lecture on “Uncovering the Mysteries of Tsunami Generation and Anomalous Seismic Radiation in the Shallow Subduction Zone”.

The summer school on Earthquake Science “Diversity of Earthquakes”