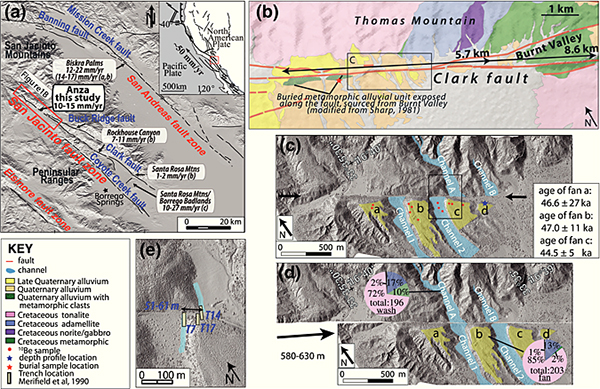 Stable, rapid rate of slip since inception of the San Jacinto fault, California

In California, where the San Jacinto fault (SJF) and San Andreas fault (SAF) accommodate the majority of the dextral shear deformation between the Pacific and North American plates, initiation of the SJF led to an apparent decline in the slip rate of the SAF. Previous studies suggest that since then, slip rate has covaried between these faults (possibly due to changes in fault strength, variation in topographic loading along a fault, or the development of new faults) and that presently the SJF is the dominant plate boundary structure. However, we dated displaced sedimentary deposits and landforms over three distinct time intervals since ~700 ka, and our results imply a constant slip rate of 12.1+3.4/−2.6 mm/yr. This rate is similar to the fault’s lifetime rate and from rates derived from geodesy, suggesting that since the SJF initiated, its slip rate has remained relatively stable and does not exceed that of the SAF.