A new paper in the upcoming issue of G3 (Geochemistry, Geophysics, Geosystems) by co-authors adjunct faculty Aaron Pietruszka and alumnus Jared Marske provides new evidence for mantle-derived compositional variation for Hawaiian lavas at the scale of years to decades.  The authors present an update of their ongoing monitoring of the geochemical variations of Pu’u ‘Ō’ō lavas since its first eruption event 30 years ago. 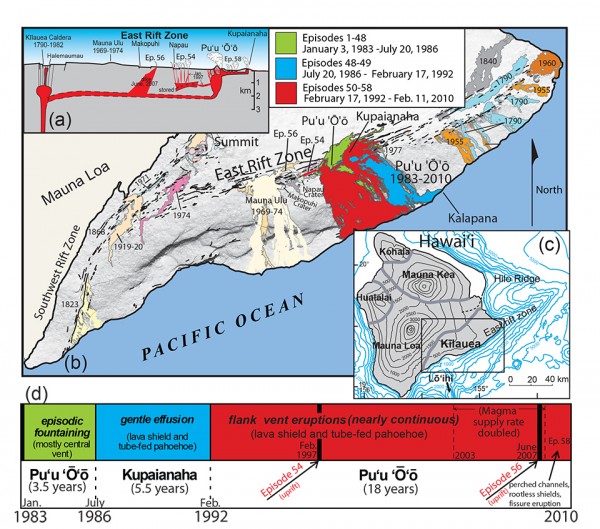 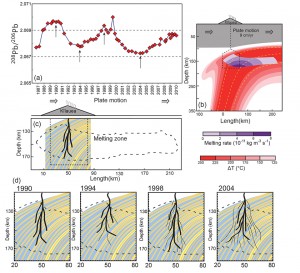 Geochemical time series analysis of lavas from Kīlauea’s ongoing Pu’u ‘Ō’ō eruption chronicle mantle and crustal processes during a single, prolonged (1983 to present) magmatic event, which has shown nearly two-fold variation in lava effusion rates. Here we present an update of our ongoing monitoring of the geochemical variations of Pu’u ‘Ō’ō lavas for the entire eruption through 2010. Oxygen isotope measurements on Pu’u ‘Ō’ō lavas show a remarkable range (δ18O values of 4.6-5.6 ‰), which are interpreted to reflect moderate levels of oxygen isotope exchange with or crustal contamination by hydrothermally altered Kīlauea lavas, probably in the shallow reservoir under the Pu’u ‘Ō’ō vent. This process has not measurably affected ratios of radiogenic isotope or incompatible trace elements, which are thought to vary due to mantle-derived changes in the composition of the parental magma delivered to the volcano. High-precision Pb and Sr isotopic measurements were performed on lavas erupted at ~6 month intervals since 1983 to provide insights about melting dynamics and the compositional structure of the Hawaiian plume. The new results show systematic variations of Pb and Sr isotope ratios that continued the long-term compositional trend for Kīlauea until ~1990. Afterwards, Pb isotope ratios show two cycles with ~10 year periods, whereas the Sr isotope ratios continued to increase until ~2003 and then shifted towards slightly less radiogenic values. The short-term periodicity of Pb isotope ratios may reflect melt extraction from mantle with a fine-scale pattern of repeating source heterogeneities or strands, which are about 1-3 km in diameter. Over the last 30 years, Pu’u ‘Ō’ō lavas show 15% and 25% of the known isotopic variation for Kīlauea and Mauna Kea, respectively. This observation illustrates that the dominant time scale of mantle-derived compositional variation for Hawaiian lavas is years to decades.