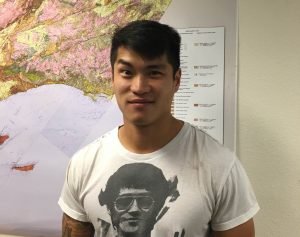 Abstract
Adobe Falls is a place name for the falls north of Interstate 8 on land owned by CalTrans, SDSU, and the City of San Diego as adjoin sections of Alvarado Creek. The ownership is complicated so names like the “Upper Falls” for the CalTrans property and “Lower Falls” for the SDSU property have been coined to help unravel some of the acrimony. Additional owners like the City of San Diego, individual homeowners and the Smoke Tree condominium association make collaboration and cooperation extremely difficult if people don’t understand the components and history of development. On June 12, 2016, a 74-year old woman was killed in the neighborhood adjacent to the SDSU land and her daughter sexually assaulted, further launching a major conflict between SDSU and the Del Cerro neighborhood. How decisions can best be made to help solve this controversy using geology as a tool was one of the goals of this project.

The Santiago Peak metavolcanics that make up most of the Del Cerro hill near SDSU is the solid rock on which parts of SDSU are built with overlying Friars Formation and Stadium Conglomerate. When CalTrans built Interstate 8, much of the current architecture of stormwater drainage, sewage drainage, and roads was constructed that equates to the modern Adobe Falls. Construction berms of boulders of Santiago Peak were used to alter the original course of Alvarado Creek on both the north side (Alvarado Road) and the north side of the freeway, with the water passing under the freeway in a large tunnel, as it also crosses under College Ave. The main sewage line was place in the Creek area and a cement “sidewalk” placed over it. Infrastructure like sewage and roads were built in tandem with the Santiago Peak boulders used as the building materials for the stormwater conduit forming the north side of campus, Interstate 8, and aspects of the Del Cerro neighborhood. Additional challenges of a large landslide related to the Friars Formation near the Smoke Tree Condominiums and Adobe Falls Road cul-de-sac as well as smaller slides that destroyed or damaged homes several decades ago are also part of the subtle geologic setting. Also present across the SDSU property is a high-pressure gas line that also crosses part of Del Cerro and connects to the SDSU power generating system and is a potential risk.

High-resolution drone imagery and video help provide a common situation awareness to decision makers without visiting the Falls, as well as recording the progress of the fences, further graffiti, and change of invasive species along Alvarado Creek. These efforts to gather, understand, and share the imagery and geologic insight helps solve the controversy between SDSU and the Del Cerro neighborhood. It also helps demonstrate how involvement with the community and sharing geology and tools for discovery can wonderfully benefit the school and neighborhood. It is a “Geologic Ambassadorship” to provide imagery and suggested solutions to school, city, CalTrans, and community leaders. Real and high-resolution information are far better than simple maps or acrimony around historic perceptions of unreality, or words expressing vague and jargon descriptions of the geology and geotechnical setting as would generally be used to satisfy compliance requirements like Environmental Impact Reports.