Weathering of an 108 Ma Cretaceous gabbro within a Mediterranean climate: a case study of unusual elemental mass redistribution 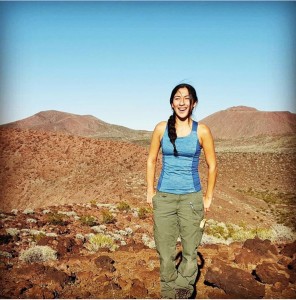 At Santa Margarita Ecological Reserve (SMER), southern California, USA, a large 108 Ma gabbroic to tonalitic pluton underlies residual regolith of variable thickness and character.  Previous studies have documented that in situ weathering of the quartz dioritic to tonalitic parts of the pluton was driven primarily by the transformation of biotite to vermiculite. In contrast, weathering of the gabbroic parts of the pluton have not been previously studied.  We therefore undertook a petrological, clay mineralogical, and geochemical study of an ~2 m thick section of regolith underlain by gabbro.
At the study site, the lower 1.5 m of the exposed regolith is characteristic of spheroidal weathering.  A mixed zone, ~16 cm thick, overlies the lower ~1.5 m interval of spheroidally weathered gabbro and consists of sub-horizontally fractured saprock along with seams and bands of material derived from the overlying soil.  Within the mixed zone, the density of small centimeter-thick-diameter roots is significantly greater than in the underlying spheroidally weathered gabbro, and a black coating of Mn oxide or oxyhydroxide is common along fracture walls penetrated by the root system. A biomantle, ~34 cm thick, composed of pebble to cobble sized fragments of gabbro embedded in a black to dark gray soft highly porous and bioturbated sandy soil caps the exposed section of regolith.  Though a few roots with diameters of ~1-2 cm were noted, a labyrinth of fine hair-like mostly grass roots pervade the biomantle.
Petrological, geochemical, and clay mineralogical data show that within the biomantle acidic fluids attacked primarily labradorite, leaching Si, Al, Ca, and Na mass and converting the An-rich cores to kaolinite.  In addition, P was leached from apatite while K, Mn, Fe and Mg mass were removed from biotite, hornblende, and pyroxene.  The iron-rich smectite, nontronite appears to be the weathering product of the weathering of the latter three minerals. Within the biomantle, adsorption and exchange onto clay particles and organic matter, and absorption by roots retained much of the released K and Mn mass and some of the released P and Ca mass.
Upon reaching the mixed zone, fluids encountered a decreased reactive surface area, and their pH probably increased. As a result of these two factors, much of the masses of Si, Al, and Mg leached from the biomantle increased through exchange and adsorption on to clay mattes within the mixed zone.  In addition, fluids migrating downslope brought in Mn mass which was adsorbed or exchanged on to clay mattes, absorbed by roots, and precipitated as a coating of oxyhydroxide and oxide onto fracture walls.  Fluids reaching the mixed zone were saturated with respect to Ca and Fe, and as result, they carried Ca and Fe mass leached from the overlying mantle biomantle laterally out of the plane of the sampled section of regolith.
Within the concentrically fractured saprock, vermiculite formed as fluids removed K from biotite.  In addition, nominal amounts of Ca were leached from An-rich domains in plagioclase, and Fe was probably oxidized in biotite, hornblende and pyroxene. Portions of the latter two minerals also were converted to smectite.  The above data are consistent with the idea that elemental mass redistribution patterns within the gabbroic regolith developed through fluid/mineral interactions mitigated by adsorption and exchange onto clay particles and organic matter, and nutrient uptake within the root system of the Chaparral plant and grass community.