Paleoseismology of the Imperial Fault at the U.S.-Mexico Border and Correlation of Regional Lake Stratigraphy Through Analysis of Oxygen/Carbon Isotope Data 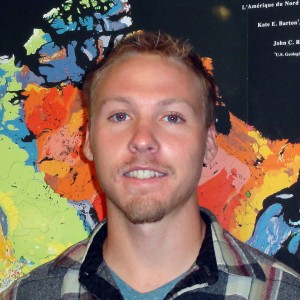 Abstract
To better understand the long-term rupture behavior of the Imperial fault, we conducted a paleoseismic study in the area of high displacement from the 1940 Mw 6.9 earthquake approximately 1.4 km north of the U.S.-Mexico border. We excavated a 25 meter long trench across a sag feature created by a 30 meter wide releasing step in the fault as seen in aerial imagery from 1940. In addition to 14C dating of detrital charcoal, three of the most recent Lake Cahuilla highstands were identified which allowed us to better constrain our age control by using a recently developed high resolution Lake Cahuilla chronologic age model. Our 3.6 meters of deltaic and lacustrine stratigraphy exposed in the trench represents the past 400-550 years of sedimentation. Five events were identified through the identification of sand dike intrusions, liquefaction sand deposits, growth strata, angular unconformities and varying amounts of vertical offset. Through retrodeformation analysis, it was determined that the penultimate event, which occurred very soon after the most recent Lake Cahuilla highstand, exhibited very similar vertical offset to the 1940 earthquake, which had 6 meters of lateral displacement, implying it was also a large event. Events 3 and 4 produced very little vertical offset suggesting they were small, perhaps 1979-type ruptures. The fifth and oldest event appears to have caused major deformation suggesting it was also a large event. Five events in the last 475-521 years yields a recurrence interval of 95-104 years.  Correlation to the paleoseismology study of Dogwood Road by Rockwell et al. (2011) allows for multiple scenarios of fault ruptures on the Imperial fault, which have significant implications for characterization of the fault as a whole. A second focus of this thesis was to analyze lacustrine shells and assess whether isotopic analysis can be helpful for properly identifying individual Lake Cahuilla highstand deposits in the Salton Trough region. The small gastropod  Tryonia protea was collected from six different lakes at two different locations, Carrizo Wash of the western Salton Trough and Coachella of the northeastern region. While the averaged δ13C and δ18O values for shells from Lakes 2 and 4 of both sites show similarity, Lakes 3 and 6 showed dissimilar averages.