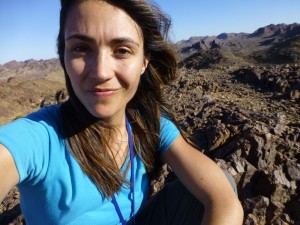 Abstract
In order to characterize the petrological and chemical effects of illuviation, we collected 14 samples from an ~6.7 m high tonalitic corestone (tor) and 17 samples of saprock from an adjacent ~65 cm deep trench extending laterally ~1.5 m. Based on thin section observations, all saprock samples are characterized by a network of transgranular and intergranular cracks filled or lined with illuviated clay.  The silicate mineral framework has been weakly to mildly weathered, and as result, biotite has been partially transformed into vermiculite and mixed-layer biotite/vermiculite. Plagioclase has been weakly weathered to a dusting of smectite and hornblende has been weakly weathered to Fe- or Mn-oxyhydroxide, or both. The weathering of biotite at the 95% confidence level translates into a 6 ± 4% loss of K mass. In contrast, the weathering of plagioclase resulted in no statistically significant loss of Ca or Na mass. At the 95% confidence level, 38 ± 5% loss of Ba mass is likely due to the weathering of biotite.

The above effects of eluviation contrast markedly with the statistically significant additions of Si, Al, Fe, Mn, Ti, Sc, Cr, Cu, Rb, Y, and Yb mass produced by illuviation.  Such additions at the 95% confidence level translate into an overall statistically significant 12.5 ± 3.6% increase in bulk mass.  The above increases in elemental and bulk mass are a reflection of eluvial processes operating in the overlying section of regolith removed by erosion.  Within that overlying section, kaolinite; minute particles of biotite, hornblende, and ilmenite; and ions derived from leaching of these mineral were suspended into downward percolating fluids.

On centered p(A)-p(CN)-p(K) ternary diagrams, illuviation resulted in a well-defined compositional linear trend anchored by the geometric mean of the corestone samples and the projected composition of kaolinite at the p(A) apex.  Notably, this trend is unlike that documented for biotite-controlled and plagioclase-controlled weathering.