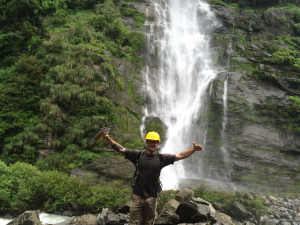 Abstract
Chollas Creek is an intermittent urban stream that drains stormwater and local runoff into San Diego Bay, San Diego, California. This impaired creek travels through some of San Diego’s most economically disadvantaged neighborhoods, commercial and industrial facilities, major freeway systems, and one of the largest U.S. naval bases in the country. Significant metal loading to the sediment is likely due to runoff from the vast impervious surfaces that collect vehicular-born contaminants. The sediment at the mouth of the river has shown toxicity to certain species. This study evaluates the sediment upstream as a source for the sediment toxicity found at the mouth of the creek. Chollas Creek has a Total Maximum Daily Load allocation for dissolved copper, lead, and zinc, so these metals were the primary elements assessed in this study. Bulk sediment chemistry was analyzed in thirty-seven sediment samples collected at twenty-eight outfall locations within Chollas Creek. The top one-inch of sediment was collected and X-ray fluorescence was the primary method used. Chollas Creek XRF data were compared to portable XRF data collected in a separate study five km south in Paleta Creek to assess data quality. Quality control measures were also taken by collecting field duplicate samples. The average relative percent difference of the original-to-duplicate samples was 14.1%, 2.8%, and 9.9% for Cu, Pb, and Zn, respectively. These data were assessed using numerical sediment quality guidelines to predict toxicity. The results show that 41%, 27%, and 54% percent of the samples for Cu, Pb, and Zn, respectively, fell between the threshold effects concentration (TEC) and the probable effects concentration (PEC) which indicate a possibility for toxicity. Two of 37 samples were above the PEC for Zn alone which predicts that toxic effects are likely to occur. More weight of evidence needs to be compiled to show upstream sediments are in fact a source of contamination and toxicity to the mouth of Chollas Creek. Confirmatory analysis and additional data collection need to occur to argue this point more effectively.