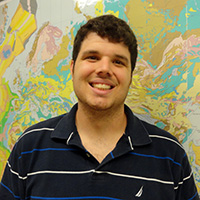 The segment of the San Jacinto fault studied during this investigation forms the basal shallowly to moderately SW dipping, NE verging, oblique-slip thrust fault of the NE part of a remnant of a positive flower structure that was exhumed from ~220 m depth.  It places pre-mid Cretaceous garnet amphibolite facies gneiss of the Burnt Valley complex over alluvial sandstones of the Bautista Formation.

At the study site, damage along the San Jacinto fault is asymmetrically developed, with the majority occurring within the ~15 m wide damage zone in the Burnt Valley complex.  In contrast, along the NE side of the fault zone little macroscopic damage occurs within sandstones of the Bautista Formation, and most damage occurs within an ~10-12 cm thick zone of protocataclasite and mesocataclasite located on the Bautista side of a composite fault core.  Within this zone of cataclasis, communition is greater then outside it, and fluids leached and removed 13% (+12%/-10%) V and 12% (+11%/-10%) Nb mass from biotite as it was converted to clays. In addition, the percentage of illite in mixed-layer illite/smectite was increased from 10% in microscopically damaged sandstones outside the zone of cataclasis to 40% within some cataclasite specimens.  Within the damage zone, quartz, and to a lesser extent plagioclase and amphibole, underwent in situ fragmentation and formation of jig-saw puzzle texture.  Relative to weakly damaged specimens, moderately damaged sandstones exhibit a statistically significant increase in volumetric strain of 17% (± 15%), and a statistically significant loss of 20% (+17%/-14%) LOI mass.  Moderately damaged sandstones generally have a higher percentage of porosity than do weakly damaged samples (~4.5 – 15% compared to ~12 – 25[TR1] %).  These results, along with the statistically significant increase in volumetric strain, suggest that in situ fragmentation, within at least some moderately damaged samples, likely took place following hardening and consolidation of the clastic matrix.  Relative to weakly damaged samples, severely damaged specimens suffered a statistically significant loss of 20% (+18%/- 15[TR2] %) LOI mass, but retained porosity values (~7 – 16%)similar to those in weakly damaged specimens.  Given the absence of volumetric strains, this loss in LOI mass likely reflects the smaller percentage of clay-rich matrix in the severely (~12-17%) as compared to the weakly damaged sandstones (~16-36%). In short, in situ fragmentation within the severely damaged sandstones may have occurred while the matrix was more fluid-like; hence, as dilational interstitial voids opened within brittely deforming grains they were quickly infilled by the matrix.  Though some grains in damaged sandstones are incipiently pulverized, none appear ellipsoidal or elongated in shape.  This relationship, and other characteristics described in this paper, suggest that vertical loading produced by the shallow oblique-slip over thrusting of the Burnt Valley complex over the Bautista Formation is unlikely the cause of in situ fragmentation.  Instead, we favor the idea that strong tensional stresses produced by the dynamic reduction of normal stress associated with passing ruptures on the San Jacinto fault are the primary factor in the development of this intriguing feature.