Geology of the Cahuilla Gold-Silver Deposit and Modoc fault of the western Salton Trough, southern California 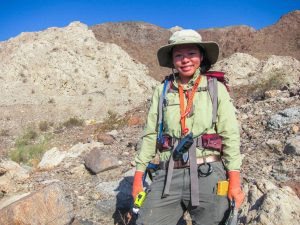 Abstract
The Cahuilla gold-silver deposit is a Quaternary epithermal paleo-hot springs high-grade type deposit that covers an approximately 4-kilometer square area at the southern end of the Santa Rosa Mountains on the western side of the Salton Trough in southern California.  The Cahuilla deposit is closely related to the northeast-southwest trending Modoc fault which is a down-to-the-southeast normal fault.  Mapping was focused on the kinematics of the Modoc fault and hydrothermal near-surface alteration. Mineralization is restricted to units within the hanging wall of the fault that encompass Plio-Pleistocene non-marine fluvial and alluvial fan deposits of the Palm Spring Formation and Canebrake Conglomerate.  The footwall of the Modoc fault comprises Upper Cretaceous tonalite/granodiorite of the eastern Peninsular Ranges batholith intruded into a schist-quartzite-limestone package of prebatholithic sedimentary rock.  The Cahuilla deposit comprises silicified Plio-Pleistocene sediment with disseminated gold-silver mineralization that is host to high-grade steeply dipping banded quartz-chalcedony adularia veins and stockwork.  Siliceous sinter was additionally deposited as part of this terrestrial paleo-hot spring deposit. Thomas Dibblee defined and mapped the ‘Truckhaven Rhyolite’ from the Cahuilla deposit; however, petrography and zircon U-Pb geochronology identify this rock unit as silicified Palm Spring Formation which eliminates the possibility that the Cahuilla hydrothermal activity is related to it as a local volcanic source.  The Palm Spring Formation is determined to be a proximally derived unit from the eastern Peninsular Ranges based on nearly identical zircon U-Pb age distribution to footwall basement granitoids.  Whole rock major and trace element compositions from X-ray fluorescence analysis documents elemental mobility associated with silicification of Plio-Pleistocene strata and the addition of sericite.  X-ray diffraction analyses document the formation of kaolinite and vermiculite clays and alunite in response to hydrothermal mineralization.  The Cahuilla deposit can be alternately interpreted as 1) the result hanging wall mineralization associated with the nearby Western Salton Detachment fault, or 2) hydrothermal activity associated with a step-over within the younger San Jacinto fault system that was initiated at ~1.2 Ma.  The recognition of primary vapor phase jarosite in high-grade stockwork veins provides a means by which Cahuilla mineralization could be dated by 40Ar/39Ar methods and thus resolve between these two options.