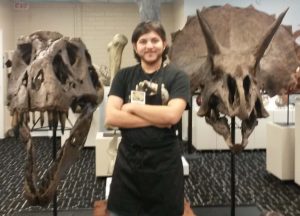 Abstract
There has been much debate over the possible causes of perforations often seen on ammonite shells. Some scientists have claimed that they were signs of a predator attack, while others maintain that limpet home scars combined with sediment loading diagenesis were a more likely cause. This project contributes to this ongoing debate via study of two Placenticeras meeki shells on display at the Roynon Museum of Earth Science and Paleontology and several fossil cephalopods and limpets at the San Diego Natural History Museum. The research has ultimately called the limpet hypothesis into question, and the predation hypothesis has been deemed the more probable explanation. Several different genera of Cretaceous sea predators were examined as possible culprits, with Prognathodon being identified as the most probable predator causing the Placenticeras perforations. Evidence of both predation and scavenging are also explored on both of the Roynon Museum ammonites, as well as further implications into mosasaur predator-prey interactions.