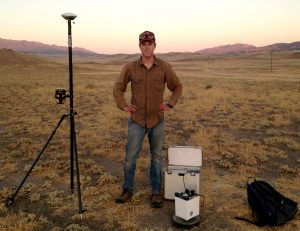 Abstract
A detailed description of subsurface geology is a fundamental factor to understanding the quantity of water-bearing material (aquifer) available in a groundwater basin. In order to define the subsurface aquifer geometries, a gravity survey was conducted in Warner Valley Groundwater Basin (Basin), located in North County San Diego. By assuming a simple two-layer model consisting of an aquifer and bedrock, the survey aimed to delineate bedrock topography by measuring the minute changes in Earth’s gravitational attraction, which are a direct result to changes in subsurface densities. Over 300 gravity measurements were taken during the course of several weeks using a LaCoste & Romberg Model D gravimeter. Three survey lines ranging up to 3 km in length were conducted in the north-east region of the Basin, with observation point spacing’s between 50 and 100 meters. The data was corrected using standard gravity survey reductions including instrument drift, Earth tidal variation, latitude variation (Normal Gravity), excessive mass (Bouguer correction), and changes in elevation (Free Air correction). The corrected values resulted in a relative Bouguer Anomaly that was modeled using GRAVMAG software to determine the geometry of the subsurface aquifer. The results of the survey showed relative Bouguer Anomaly variation of up to 1.6 mGals in some areas of the Basin. By using known bedrock depths obtained from well-logs, depth controls were possible in select areas. Our model of the subsurface assumed an average density contrast of -0.22 g/cc between aquifer and bedrock. Also observed in the survey were features interpreted as faults, which were shown by abrupt changes in the trend of the Anomaly. The accuracy of the model showed that gravity surveying is a viable technique for determining aquifer geometry in a simple two-layered model. This information may be used to fill data gaps from using well-logs alone, and may contribute to an overall better understanding of aquifer material available for groundwater resources.