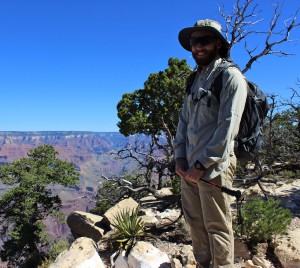 Abstract
Pliocene-Pleistocene sedimentary rocks of the Salton Basin, SE California have long been recognized for their complicated fold and fault fabric and the role that strike-slip faults of the San Andreas system have played in the development of this fabric.  However, few studies have focused on characterizing structures developed immediately adjacent to individual strike-slip faults.  Hence, I undertook a study of a small area located near the termination of the Powerline fault in the Ocotillo Wells State Vehicular Recreation Area.

In order to characterize the geometry of the Powerline syncline, a detailed stereonet analysis of the fold along three cross sections was evaluated. The first step was to determine the average attitude of bedding making up the northern and southern limbs along each cross section. To complete this task, poles to beds making up each limb were plotted and then contoured using the program StereoNet. The resulting average attitude for each limb was then used to find the interlimb angle, attitude of the axial surface, and plunge of the syncline along each of the three cross sections. Resulting data indicate that the syncline ranges from open to tight, upright to steeply inclined, and gently plunging to sub-horizontal. The interlimb angle varies from 89° to 128°, the dip of the axial surface from 69° to 89°, and the plunge from 27° to 1° to the east.

Cutting the Powerline syncline, and northern and southern reverse faults is a set of conjugate NW striking dextral and NE striking sinistral faults.  A geometrical evaluation of the strikes of this conjugate fault system revealed that the maximum principal stress direction during their formation was likely oriented ~N8E. This orientation is also consistent with the shortening direction indicated by the Powerline fault, and the northern and southern reverse faults.  Hence, the fault-fold fabric near the SE termination of the Powerline fault appears to be governed by Andersonian principles.