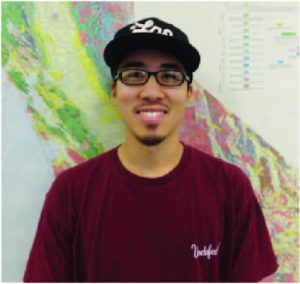 Abstract
In the Santa Margarita Ecological Reserve (SMER), Peninsular Ranges, southern Ca, USA, spheroidal to ellipsoidal corestones encased in saprock are common components found within the regolith.  Though such features are relatively common throughout the Peninsular Ranges, investigations in to how element redistribution patterns around individual corestones might reflect the processes and causes of spheroidal weathering in three-dimensional space have not been undertaken.  Hence, a geochemical study of element redistribution patterns along horizontal (X and Y) and vertical (Z) axes transposed onto a quartz dioritic corestone and adjacent saprock lying near the base of a 6 m thick section of regolith at SMER, was undertaken.  In thin sections of saprock immediately surrounding the corestone, biotite, the most severely weathered mineral, commonly is split parallel to {001}, and seams of black opaque material parallel this cleavage direction.  Additionally, in hand specimens biotite exhibits a yellowish orange pleochroism.  Published XRD work indicates that biotite throughout the 6 m section of regolith has been converted mostly to vermiculite.  Utilizing Ti as an immobile element, mass balance calculations show that K mass was consistently removed from the parental corestone as it was converted to saprock.  In contrast, only minor and irregular losses of Si, Al, Ca, and Na mass are evident, while no mass redistribution of P, Fe, Mn, and Mg mass occurred.  The above observations and data are consistent with the idea that the oxidation of Fe produces a charge imbalance within the biotite structure, and as a result interlayer K is displaced, and (001) d expands from 10 Å to ~14 Å.  Complete transformation of a biotite grain to vermiculite would thus involve an ~40% volumetric expansion.  Such strains exceed the elastic strength of the host rock, and are the main causes of spheroidal weathering in the studied outcrop.