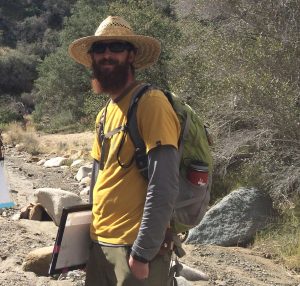 Abstract
The Talitha Sand Blow was studied using ground penetrating radar to understand the shallow subsurface morphology of the blowout with an ultimate goal of understanding climate’s impact on blowout formation and evolution. The Talitha Sand Blow is located in southeastern Queensland, Australia on the east-facing coast of Frazer Island off the East. In March 2016 an interdisciplinary team used a MALA GeoSciences 160 MHz ground penetrating radar system to reveal the subsurface architecture to a depth of 25 m. A total of eight lines representing 600 m on survey lines were acquired. Lines were acquired parallel and perpendicular to blowout morphology with two additional lines obliquely crossing the main erosive area of the blowout. The subsurface architecture and spatial relationships were used to relate areas of erosion, deposition and bypassing to current surface morphology as well as understand how the blowout has evolved. Ultimately, the results from the survey will be used to establish present and palaeo wind directions, relate times of blowout activity to regional and global climate. The eastern coast of Frazer Island, and the sand rich coast of southeastern Queensland, is lined with sand blowouts. Presently, the impact of these features on island stability and relationship to climate variations is poorly understood. This work serves to establish a stratigraphic framework for future work as well as understanding the defining characteristics of a coastal blowout in order for the team to recognize palaeo blowouts that have been buried during the >1,000,000-year evolutionary history of Fraser Island and the sand-rich coast of southeast Queensland.