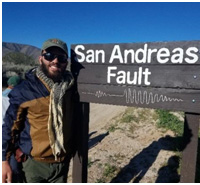 Abstract
The Salton Trough is developed by rifting and transform motion of the seismically active San Andreas Fault resulting in geothermal fluids close enough to the surface to extract. The region has four operating geothermal fields (Salton Sea, Brawley, Heber, and East Mesa) that generate a total of over 650 MW of electricity (Brodsky & Lajoie 2013). A major component of geothermal operations is fluid injection, which has been shown to induce seismicity in a variety of settings (Brodsky & Lajoie 2013) including within the Salton Trough.

While fluid injection has been shown to induce seismicity within the Salton Trough, it is as of yet unclear whether or not fluid injection alters pore pressure along the San Andreas Fault. To test this hypothesis, we envisioned a single injection well operating 5 kilometers from a hypothetical fault zone, which was parameterized to be a proxy for the San Andreas Fault Zone. The fault zone architecture consists of a narrow fault core composed of clay-rich gouge and fault damage zone which is fractured and permeable (Caine et al.). The fault damage zone acts as a conduit while the fault core acts as a barrier. The architecture of the fault zone and their permeability are primary controls on fluid flow in upper-crustal, brittle fault zones (Caine et al.).

We simulated the effect of 4 years of fluid injection at high, medium and low injection rates in proximity to the simulated fault zone using MODFLOW, a modular 3D dimensional finite difference code. The injection rate scenarios were guided by the existing fluid injection operations in the Salton Trough.  A generalized hydrogeological model of the Salton Trough was discretized to accurately capture fluid pressure diffusion from the injection well through the fault zone. Preliminary results of the spatial distribution of pore pressure change show that the fault zone acts primarily as a barrier for fluid pressure. Under the highest injection scenario tested, pore pressure changes along the fault zone reach 0.2 MPa at the depth of injection and 0.006 MPa at depths within the crystalline basement.