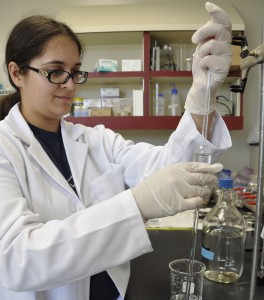 Abstract
Elemental analyses of alluvium and rocks within the western Mojave Desert, southern California, were done to evaluate concentrations of selected trace elements in alluvium that could potentially enter into groundwater. Twenty-seven elements including naturally-occurring water-quality contaminants such as arsenic, chromium, and uranium were analyzed using both handheld (HXRF) and laboratory (LXRF) x-ray fluorescence spectrometers. For most elements comparison of LXRF and HXRF data was good, although HXRF overestimated iron compared to LXRF data. Arsenic concentrations in the study area were greater than average continental crust, and higher in volcanic and hydrothermally altered terrains with concentrations as high as 120 milligrams per kilogram (mg/kg). Chromium was more abundant in mafic terrains with concentrations as high as 300 mg/kg in alluvium and 8,600 mg/kg in rocks. Chromium concentrations were higher in older deposits from the Mojave River that drains the study area as a result of changes in geologic source areas over the last one to five million years. Uranium concentrations were generally less than the reporting limit of 2.8 mg/kg. Most uranium was in alluvium eroded from felsic terrains and lake deposits. Extractable elements were mostly present in the strong-acid extraction phase, suggesting they are incorporated into crystalline oxide coatings on the surfaces of mineral grains. Extractable elements were more concentrated in fine-grained sediment, indicating a correlation with increased surface area. Comparison of sequential-extraction and HXRF data showed arsenic and uranium present at higher concentrations on the surfaces of mineral grains, while chromium and vanadium were mostly within primary mineral grains.