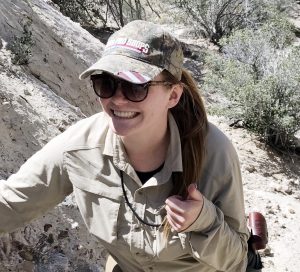 Abstract
A large number of archaeological sites have been found onshore in Central Oregon, but it is likely that archaeological evidence also extends into the offshore. During the Last Glacial Maximum (LGM), which was about 20,000 years ago, global sea level was ~120 meters lower than what it is today. This significant difference in sea level could have allowed for the arrival and settlement of the First Americans in areas that are now submerged. The near 120-meter drop in sea level brought the LGM coastline out to the edge of the continental shelf. Paleochannels that stemmed from the Siuslaw and Umpqua Rivers would have traversed the shelf and created a viable natural resource for people living in the area. Archaeological sites onshore are often found near freshwater resources, so these are important places to look for sites offshore. A model of paleochannels across the shelf was previously created using modern bathymetry that showed the paleochannels flowing directly to the west. However, paleochannel mapping in sub-bottom Chirp data revealed a major difference in course of the Umpqua River, which shows a major southward bend before reaching the LGM coastline. The question then is why don’t the paleochannels follow the previously modeled patterns? One possibility is that geologic structures, such as folding and faulting along the shelf, could control the paleodrainage patterns. These structures were mapped in high-resolution Chirp sonar data across the shelf including numerous small-scale synclines, anticlines, and faults seen throughout the data. Large-scale structures included some major folds, but the most notable features were bathymetric mounds. These mounds are interpreted to be related to expulsion of fluids and mud (e.g., mud volcanoes), which are common on convergent margins. The location of the mounds is thought to be fault controlled, but it is difficult to determine because of the lack of penetration depth in the Chirp data. These mounds appear to control the Umpqua River paleochannel by forming a bathymetric high to offshore from the modern river mouth. This high appears to divert the flow of the paleodrainage to the south. Further research is currently being conducted to incorporate this information into archaeological resource models and to determine if there is archaeological evidence adjacent to the updated paleochannel locations.