The Pleistocene Bautista Formation and the San Jacinto Fault: Setting the stage for future studies 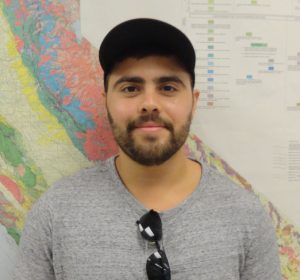 Abstract
The variably thick, Pleistocene Bautista Formation is scattered throughout the San Jacinto fault zone and is a prominent lithology that is juxtaposed against other rock types.  It contains a vertebrate fauna that is like that at the La Brea tar pits and is generally indicative of a Pleistocene climate that was cooler and moister than that existing in the same area today.  A published paleocurrent study showed that detritus making up the Bautista was derived primarily from eastern sources.  Based on these and other data, the Bautista beds were speculated to have been deposited after termination of Pliocene movement on the Western Salton Detachment, and during the Pleistocene development of the San Jacinto fault zone.  A principal goal of fault zone architectural studies is to understand fully what happens to rocks as they become incorporated into the damage zone lying adjacent to fault cores which include the principal slip surface. Unfortunately, the petrology of sandstones within the Bautista Formation has never been studied.  To mitigate against this deficiency in data, I undertook a detailed study of sandstones in the Bautista Formation at the Hog Lake locality.

At the Hog Lake locality, a SW verging thrust fault appears to merge off the main trace of the San Jacinto fault.  It places, high grade metamorphic rocks of the pre-mid Cretaceous Burnt Valley complex of the hanging wall block, over pebbly to cobbly sandstones of the Bautista Formation in the footwall. Sixteen samples of sandstone were collected across the exposed outcrop belt of the Bautista, and were thin sectioned and point counted.  Each thin section was chemically stained to distinguish between plagioclase and K-feldspar.  The Gazzi-Dickinson point-count method was used, and 300 points at a spacing of 1 mm were identified and tabulated.  The results of this exercise indicate that sandstones at the Hog Lake locality are poorly to very poorly sorted and are composed of a framework population that is dominated by very angular to subround crystal and rock fragments.  On the classification scheme of W.R. Dickinson, all samples plot in the feldspathic sandstone field.  Not surprisingly, on the QFL provenance-discrimination developed by W.R. Dickinson and students in 1984, samples spread about the boundary separating the basement uplift from transitional continental block fields.  In thin section, plutonic microphaneritic rock fragments are significantly more abundant than are metamorphic aphanitic rock fragments.  The latter commonly contain sillimanite ± K-feldspar.  The maximum and minimum plagioclase to total feldspar ratios are 0.95 and 0.53 while the median and mean are both 0.77.  Given that during weathering and transportation plagioclase is far more susceptible to dissolution then are K-feldspar and quartz, these values are probably minimum estimates. The plagioclase to total feldspar ratio for unweathered granodiorites is > 0.65% and for tonalites is > 0.90%.  Hence, the predominate source for the Bautista Formation was likely granodiorite, while both tonalite and high-grade sillimanite bearing metamorphic rocks played a lesser role.  Porosity was determined from grain and bulk density measurements.  Outside the zone of damaged rock adjacent to the overthrust Burnt Valley Complex, it varies from ~15%-30%.  Hence, any study focused on understanding processes operating within the zone of damaged sandstones, should look for and consider the effects of inelastic strains produced by pore collapse, intragranular fragmentation, and compaction band development.