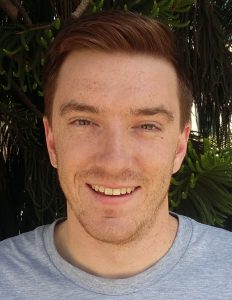 Abstract
We collected a continuous sample of the fault core and 23 samples of the fault zone out to 52 m across the rupture trace of the 2010 M7.2 El Mayor-Cucapah earthquake to characterize the physical damage and chemical transformations associated with this active seismic source. In addition to quantifying fracture intensity from macroscopic analysis, we studied thin sections from the fault core and damage zone, and analyzed samples for clay mineralogy, bulk geochemistry, and bulk and grain density from which porosities and volumetric strains were derived. The parent rock is a deuterically-altered tonalite, containing a chlorite, epidote, and titanite assemblage. The presence of epidote with chlorite suggests that during deuteric alteration parental rocks were subjected to relatively high temperatures of 330-340° C. Adjacent to the outermost damage zone is a chaotic breccia with distinct physical characteristics. These distinctive features suggest a possible connection to an ancestral fault to the southwest. The damage zone consists of an outer zone of protocataclasite, grading inward to mesocataclasite with seams of ultracataclasite. The fault core is largely composed of marble that has been translated along the fault, so direct comparison with the tonalitic damage zone is impractical. Porosity reaches maximum values in the damage zone adjacent to the core, and closely follows trends in fracture intensity. Volumetric strain tracks porosity, and increases towards the core. Elemental mass redistribution patterns reveal losses in Ca and P mass, suggesting an acidic character to fluids traversing the damage zone. In addition, increases in Mg and Na mass across the damage zone likely reflect chloritization of biotite and albitization of plagioclase at temperatures that probably were ~200° C. Parallel losses of Ti and Fe mass likely reflect leaching from biotite as it was converted to chlorite. Gains in LOI mass are attributed to an increase in clay content, and alteration of plagioclase to illite was likely aided by the introduction of some K mass. These patterns are interpreted to reflect a Na- and Mg-rich hydrothermal brine percolating across the damage zone and likely driving the chloritization and albitization observed in thin sections of the damage zone. Such brines are well-documented in the Cerro Prieto geothermal system and other hydrothermal systems in Baja California, Mexico.