Examining Fault Scarps in the Yuha Desert, to Determine if they were caused by the 1892 Laguna Salada Earthquake 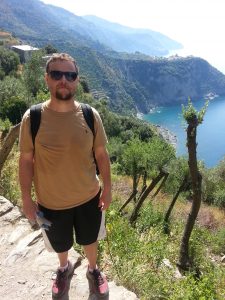 Abstract
The most recent large Laguna Salada fault rupture occurred at 23:20 Pacific Standard Time on February 23, 1892 and exhibited oblique normal-dextral slip.  The moment magnitude was estimated to be Mw7.2, with maximum intensity (MMI) of X in the western Imperial Valley and VII (Severe) in San Diego.  This fault exhibited about 55 km of surface faulting, with horizontal displacement as large as 4 m and dip slip as high as 5 m. To further examine the extent of this earthquake, a pair of fault scarps in the Yuha Desert that were suspected as possibly having ruptured in 1892 were chosen to examine.  These scarps were chosen because on aerial imagery, they could be seen crossing Quaternary alluvium, and thus were suspected to be young.  They were analyzed by first profiling the scarps, then calculating the scarp ages using diffusion modeling.  Finally, scarp profiles were compare to data from known examples of surface ruptures of the 1892 earthquake.  It was ascertained that both scarps were part of an older slip, and not a result of the 1892 earthquake.