The Provenance, Sedimentology, and Stratigrphy of the Table Mountain Formation 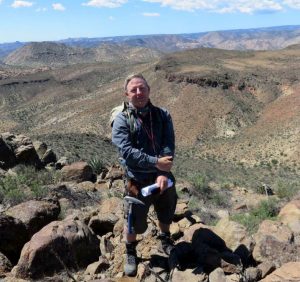 Abstract
The topography of the Peninsular Ranges in southern California and northern Baja California is dominated by an immense exhumed Late Cretaceous erosional surface that spans the international border region. Interpretation of the strata deposited across the top of this surface is crucial to reconstructing the Cenozoic paleogeography of southwestern North America. The Eocene Ballena and Las Palmas fluvial systems that traversed this surface document the existence of extra-regional, westerly flowing drainage systems sourced as far east as Sonora and southwest Arizona along the line of the Mogollon-Sevier highlands. This study focuses on lower-to-middle Miocene fluvial deposits known as “Table Mountain gravels” that outcrop in the Jacumba area between the Eocene Ballena and Las Palmas drainages. The Table Mountain gravels rest depositionally on eroded crystalline basement of the Peninsular Ranges batholith, overlain by the middle Miocene Jacumba Volcanics and Alverson Formation. These relatively thin sequences —predominantly sandstone and conglomerate—are interpreted as fluvial deposits, based on scour-and-fill structures, cross-bedding, channelization, and clast imbrication. Measurements of clast imbrication record a general flow to the west of these sediments. Detrital zircon U-Pb dates include a distinct component of Laramide age grains, also consistent with west-flowing drainage. Conglomerate clasts include some extra-regional silicic metavolcanics. Whole rock major and trace element analysis of these metavolcanics reveals silicic compositions and volcanic-arc related signals. A zircon U-Pb age of 147 Ma from one of the clasts is similarly dated to Late Jurassic arc rocks inboard of the Peninsular Ranges that also appear as clasts in the Eocene Ballena and Las Palmas deposits. It is possible that the 147-Ma clast was reworked from the Eocene river channels. The eastern paleo-headwaters of the Table Mountain gravels deposit is an important question that bears on the tectonics of the Pacific-North American plate boundary region. Although this work clearly documents a west-flowing early-to-middle Miocene fluvial system, the headwaters of the system may not have extended any farther east than the eastern portions of the modern Peninsular Ranges.