The Alberhill clay deposit in the Silverado Formation of southern California – a result of paleosol weathering or K-Pg impact? 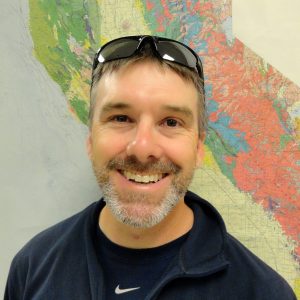 Abstract
Paleogene strata in southern California contain clay horizons at numerous localities that have been interpreted by most workers as ancient paleosols that formed in response to weathering under sustained humid tropical conditions.  The Claymont Clay bed in the Silverado Formation at the Alberhill clay pit in the northern Santa Ana Mountains is an example, which however has been recently reinterpreted to be the result of weathering from acidic solutions generated by the Chicxulub K-Pg impact event (Busch and Miller, 2016).

Evidence that the Chicxulub meteor impacting the Gulf of Mexico caused a mass extinction at the end of the Cretaceous can be seen in boundary exposures and stratigraphic sections in many places around the world including Baja California. Busch and Miller are the first to correlate the Chicxulub meteor impact to the stratigraphic record in California.

The potential impact layer in the Silverado Formation at Alberhill is a 2-3 cm thick clay layer within heavily oxidized sandstone/siltstone.  Samples were collected and analyzed by X-ray diffraction and X-ray fluorescence to determine the chemical and mineral compositions across and below the assumed boundary layer.  XRD analysis shows that the Alberhill clay is dominated by kaolinite with minor illite, similar to K-Pg boundary claystone from the Raton basin in Colorado and New Mexico (Izett, 1987). XRF trace element analysis of the Alberhill clay show that concentrations of Ni, Co and Zn are similar to values for average shale, while impact layer claystone from the Raton basin have dramatically lower contents of these elements.  K-Pg boundary marine claystone samples from Denmark in contrast have far high concentrations.  Although the Ni, Co and Zn contents of the Alberhill clay layer are not supportive, the K-Pg impact hypothesis cannot be conclusively ruled out based on data presented here.