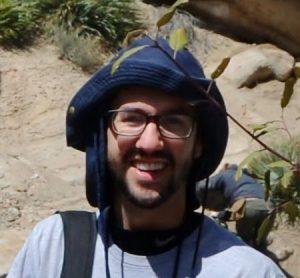 Abstract
The Punchbowl Formation comprises upper Miocene strata outcropping at the Devils Punchbowl County Park located in the northern San Gabriel Mountains just west of the San Andreas Fault. The Punchbowl Formation is approximately1500 m thick and interpreted as a nonmarine fluvial deposit of conglomerate, sandstone and mudstone that accumulated in a pull apart basin that originated during an early phase of San Andreas motion (Coffee, 2015).  The formation is divided into two members based on conglomerate clast composition.  The lower member is dominated by plutonic and gneissic basement clasts, while the upper member contains a distinct component of volcanic clasts. The volcanic clasts include rhyolite, dacite, andesite, latite and trachyte (Barrows et al., 1985).  Volcanic clasts in the upper member of the Punchbowl Formation are believed to have been derived entirely from the Jurassic age Sidewinder Volcanics in the Mojave Desert on the opposite side of the San Andreas Fault (Robinson and Woodburn, 1971; Stone et al., 2013).  These areas have now been separated by ~100 km by right lateral displacement along the fault.

The purpose of this project was to test the hypothesis that Punchbowl Formation volcanic clasts were derived from the Sidewinder Volcanics.  Volcanic clasts from the upper member of the formation were collected for chemical analysis to compare with published data from the Sidewinder Volcanics.  Sixteen representative samples of volcanic clasts were collected from the Punchbowl Formation and pressed pellets and fused disks prepared for X-ray fluorescence analysis. The results when plotted on a standard SiO2 versus total alkali diagram show that the Punchbowl clasts range in composition from rhyolites to dacites with a few trachydacites present as well. The major element chemistry of the Punchbowl clasts match pretty well with previously published data for the Sidewinder Volcanics supporting the provenance linkage suggested by prior workers. However comparison of trace element data tells a different story suggesting significant differences between these two groups of rocks.  Yttrium concentrations in particular are significantly higher in the Sidewinder Volcanics and there appear to be systematic differences in lanthanum and cerium as well.  Since these trace elements are relatively immobile during rock alteration, this result calls into question the provenance linkage between the two groups of rocks. Additional work is required to resolve this question.