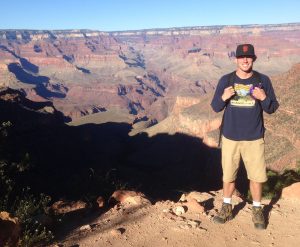 Abstract
The Devil’s Canyon exposure is an outcrop of Miocene volcanic and sedimentary in the western Salton Trough near Ocotillo, California in San Diego County.   These rocks were mapped as part of the Jacumba Volcanics on the El Cajon 1:100 000 geologic map (Todd, 2004), while similar rocks nearby at Volcanic Hills and in the Coyote Mountains were mapped as Alverson Formation.  Volcanic rocks in all of these areas have a distinctive ‘adakitic’ chemistry and are underlain by sandstone/conglomerate sequences assigned to the Split Mountain Formation (Todd, 2004; Kimbrough & Camp, 2014; Carty, 2016).   The Devil’s Canyon stratigraphy outcrops over a ~2.5 km2 area and nonconformably overlies Late Cretaceous plutonic rock.  The volcanic/sedimentary stratigraphy here has a relatively uniform strike of ~N30°W with a dip of 20°NE.  This sequence is cut by two major north-trending and west dipping down-to-the-west normal faults each of which brings the Cretaceous basement back to the surface in the footwall of the faults.  Similar geometry but smaller displacement normal faults cut the sequence as well.  Four distinctive olivine-phyric dikes cut the bedded rocks.

A stratigraphic section was measured through the westernmost fault block to document the basic volcanic/sedimentary rock types preserved here.  The volcanic rocks are dominated by a variety of monomict and polymictic relatively silicic breccias.  Volcanic flows are subordinate.  A dominant rock type throughout the sequence is hornblende phyric high silica adakite.  A zircon U-Pb age from a sample collected near the base of the central block at Devil’s Canyon yielded a well-determined age of 17.1 ±0.2 Ma which correlates to zircon ages determined from Jacumba Volcanics at Table Mountain as well as Alverson Formation volcanic rocks in the Coyote Mountains (Morgan et al., 2012).  The Devil’s Canyon volcanic stratigraphy is distinct from Table Mountain or the Alverson Formation in the Coyote Mountains or Volcanic Hills due to the absence of extensive olivine phyric lava flows that dominate the basal parts of the volcanic stratigraphy in these other areas.  The olivine phyric dikes at Devil’s Canyon however are similar in petrology to the olivine-phyic flows at Table Mountain and elsewhere.