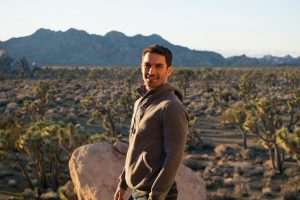 Abstract
The Transverse Ranges of California is an active fold-and-thrust belt and has produced some of the most destructive earthquakes in Southern California. Understanding the subsurface structure has both scientific and societal importance, in particular for earthquake hazard assessments. The diverse set of conflicting structural models, specifically in the western Transverse Ranges, highlights the lack in understanding of the fault architecture in the subsurface. In this talk I will present a new forward model for the Western Transverse Ranges, and test of the model predictions against GPS measurements. The forward model is based on seven forward models that explain well the observed surface geology and interpreted cross sections along the range, and explain how the southward verging fault system evolved in time since the Pliocene.

For the central Transverse Ranges I developed a structural forward model in order to explain how a similar southward propagation has also occurred for the Santa Susana fault system in the central Transverse Ranges. I will present new paleoseismic data from trenches that demonstrate the late Quaternary activity of the Mission Hills fault. Combined with the lack of accumulation of alluvium along the Santa Susana fault and deposition of new alluvium along the younger Mission Hills and Northridge Hills faults, I explain why the current slip rate assigned to the Santa Susana fault system is overestimated and how slip can be distributed along the system due to connectivity between these faults at depth.